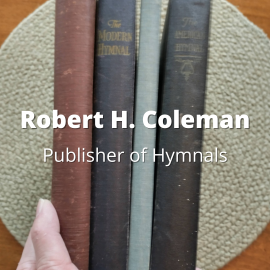 Although you won't find much information about him on the worldwide web, Robert H. Coleman and his publishing company has had a profound impact on the publication of gospel hymns and hymnals, especially those of the Southern Baptist Convention.

Robert Henry Coleman was born in Bardstown, Kentucky on November 1, 1869, was educated at Georgetown College in Kentucky, and died on February 13, 1946 in Dallas, Texas.

As a young man, he moved to Plano, Texas where he operated a drugstore, edited the Plano Courier, and made an unsuccessful run for political office.

Later, he moved to Dallas, Texas and from 1903-09, Coleman served as assistant secretary of the Dallas YMCA and as administrative assistant and director of congregational singing at the First Baptist Church of Dallas under the leadership of Pastor George W. Truett.

During his lifetime, he led the singing for many annual meetings of the Southern Baptist Convention and was the music director of the 1923 meeting of the Baptist World Alliance. 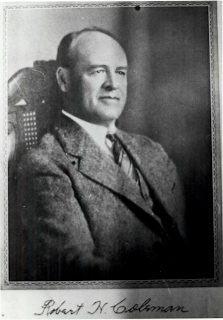 However, his influence on us comes through Robert H. Coleman, Publisher.

From 1903 to 1945, Robert Coleman was a hymnbook publisher. His music publishing business was independent of church affiliation, catering to evangelistic churches in the South and in the West. For over 30 years, he supplied hymnals and songbooks to these churches. Although he sold to many different denominations, many Southern Baptists considered him to be their publisher.

His greatest connection to Southern Baptists, however, began when he hired B.B. McKinney in 1919 as a part-time editor. McKinney worked with him until 1935. During their collaboration, Robert H.  Coleman published many of McKinney's hymns and songs. As editor, B.B. McKinney was involved in the work on over 20 hymnals and songbooks that were published during these years. These included the songbook Reapers, The Modern Hymnal, and The American Hymnal. Coleman's Songs for Men which featured many of McKinney's arrangements and songs was also copyrighted in 1932 during this time. 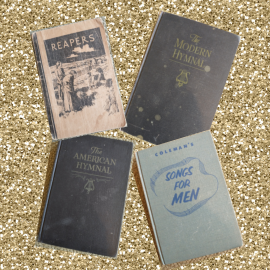 In 1935, B.B. McKinney went to work for the Sunday School Board of the Southern Baptist Convention. When he began work on The Broadman Hymnal, he found Robert Coleman very helpful in this project, unlike many other independent publishers who considered the Board a threat to their own businesses.

McKinney was so impressed with Robert H. Coleman that he lead the Sunday School Board to purchase the publishing company in 1945. This included the copyrights, printing plates, stock, and the use of Coleman's name. At that time, Robert Coleman was the largest individual songbook publisher in the United States.

In fact, new editions of many of the songbooks and hymnals were published reading "Published by Broadman Press, Nashville, Tennessee Successor to Robert H. Coleman.

The purchase of the publishing company included a stipulation hiring Coleman to run the business in Dallas for 5 years. Unfortunately, the man, Robert Coleman died the following year.

Most of the information shared in this article was gleaned from the doctoral dissertation of Terry C. Terry, B.B. MCKINNEY: A SHAPING FORCE IN SOUTHERN PROTESTANT MUSIC. Thank you, Dr. Terry for your work!

Additional information came from The Canterbury Dictionary of Hymnology and hymntime.com. 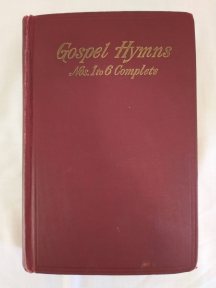